A busman’s holiday = a vacation or form of recreation that involves doing the same thing that one does at work.

A sommelier is one VERY knowledgeable about wine.

Daughter Holly is a sommelier by profession. She works for one of the largest wine distributors in the United States. So, what did she and her friend Michelle from work do on a recent weekend? Yep, you got it – they helped with the wine harvest. Michelle wrote up this account of their efforts for their fellow workers.

“Holly and I went to Joseph Swan (vineyard) to help with Harvest.  One of us worked harder than the other…. Holly not working too hard Holly and I went expecting to work alongside the Interns and provide harvest support hoping to jump in a few places to help where we could.  We quickly realized that this was not the case.  There were no interns (except us).  It was the Rodfather and Cody to do it all and they were thrilled for any and all help.  It has been a few years since I jumped on top of a tank for hand punch downs and my arms are still screaming.  Holly was the pressure washer and sorting queen.

I can honestly say the Syrah and many of the Single Vineyard Pinot Noirs have our actual sweat in them.  In addition to punch downs 3 times a day for each tank and bin (6 large ones and 6 smaller ones), they had just picked the Syrah from their estate (Trenton) early that morning and pulled in the Viognier later that morning as well.  We pressed off the Viognier first putting the tiny amount (5 bins) into a tank.  It was tasting great.  Rod decided to leave the Viognier skins inside the tank post press and sent the Syrah directly in after.  This will be their Syrah Rosé.

After pressing off the Syrah it was time for cleaning up, pressure washing and of course more punch downs.  We left around 8 pm after enjoying some 2018 Rose in bottle and a rare taste of their Cabernet Sauvignon (only 20 cases made from a super small parcel within Trenton).  I have a whole new respect for Joseph Swan, Rod Berglund (Rodfather), Cody Sapieka and the entire staff that was hosting tasters as we worked around them.  Standing at the sorting table with the Rodfather, hearing his stories or his winemaking decisions or thoughts as it was happening was priceless.

I am not sure Holly knew what she was getting into (just confirmed, she did not) when I asked if she wanted to join me, but she was a champ and impressive at every task.  Her love of power washing is unparalleled, and one might even say borderline obsessive.” Grapes just off the vine When I saw the photo below I immediately remembered my grandmother telling me that I was born under a gooseberry bush. When I was in my teens I was told that the expression meant a person was born out of wedlock. It seems both “stories” are for the birds.  Apparently ‘‘Gooseberry bush’’ was 19th-century slang for pubic hair – and so: ‘‘Born under a gooseberry bush.’’ became an innocuous (and humorous to adults) way of answering a child’s question, “Where do I/babies come from?”

Growing gooseberries of enormous size was once pursued in England’s north west with the same passion as the cultivation of giant leeks in the north east. There are now only seven annual gooseberry shows, but the prize for heaviest berry is as keenly contested as ever. Giant gooseberries are grown by removing all the growing fruit from the bush except one which is submitted in a sealed box. Just look at the size of those gooseberries

Boy I bet that was an exciting event to be at!!!!!

PS – I love gooseberry jam. BUT, finding it here is like finding hen’s teeth. You can get it – see here. Don’t buy the Swedish in Ikea – it’s not as good in my opinion.

I am a chocoholic. I am a train addict. Getting the two into one blog is tricky. I did it before with this post. This being the season of the family giving me chocolate and everything else that’s good (but not good for me – Type 2 Diabetes) I felt I should see if I could find a “thingy” combining chocolate and trains.

Whilst it is not “au courant” – it happened is 2017 – it does fit the bill. Godiva to mark the launch of the film Murder on the Orient Express, luxury Belgian chocolatier Godiva created a 10-foot replica of the Orient Express which was displayed in St. Pancras Station in London.

Pretty much every Saturday the crew who are working at the layout have lunch together. The fare is bacon sannys – white bread (untoasted), local bacon, tomato with EXTRA, EXTRA mayo. These are ordered from the Deli Cafe behind the CWR Depot around 12:40 when the crowd from the 12 noon Skunk train has dissipated and consumed with GREAT relish around 1:10 pm. These are extra special in that they have nothing in them that clogs the arteries leading to the heart!!!!!! I love redwoods. The best redwoods are those in the Avenue of the Giants just north of Garberville on Highway 101. The Avenue of the Giants is about two and a half hours from our home in Fort Bragg. We stop at Garberville on the way to the redwoods for brunch and then enjoy the redwoods till about 3.30 pm. Then we head south to the Benbow Inn. Where is it – here’s the map supplied by the Inn: This is what you are looking for on the right hand side of the road just south of Garberville: We aim to arrive at 4 pm. Why? They serve scones to die for and tea at 4 pm. Oh, those scones! For many, many years the recipe was a secret. Recently we found the recipe on the ‘Net and made some at home. Momma Mia!!!!!! Here’s what the Benbow Inn has posted about the scones:

“The Benbow Historic Inn is known far and wide for many things – It’s beautiful, remote location…It’s views of the towering Redwood tree’s and turqoise Eel River…And let’s not forget, the traditional ‘Benbow Scones’ that our guests have adored since the Benbow Inn was open to the public in 1926!

Due to popular demand, we have decided to make our ‘Secret Scone recipe’ not so secret. Now you can take this small piece of the Benbow Inn to your home whenever that hinkling arises!

As the recipe says the Inn opened in 1926. Here’s a very brief history…… Alas, the history doesn’t mention wife Sarah and Sister K who accompanied me on our last trip as among its famous visitors.

We’re just back from a trip to England.

It was great to stand and admire a genuine fish shop. Every March, St Mary’s church in the Leicestershire (England) town of Melton Mowbray becomes a cathedral of pies: it fills with tables bearing more than 800 pastries. Pies have been adding rich flavour to the English language for centuries. Take, for example, the Bedfordshire Clanger Pie: a British classic which cleverly combines main course and dessert, with savoury ingredients like pork at one end and sweet ingredients like pear at the other. The name comes from a local slang word, ‘clang’, which means to eat voraciously. However, cramming two courses into a pie makes a clanger rather unwieldy – and all too easy to drop, inspiring the English phrase ‘dropping a clanger’ for a careless mistake.

Ready for another one?  The description of a drunken state as ‘pie-eyed’ likely takes its cue from someone who, thanks to having over-imbibed, has eyes as wide and blank as the top of a pie.

One more? ‘Eating humble pie’, meanwhile, comes from medieval deer hunting, when meat from a successful hunt was shared out on the basis of social status. While the finest cuts of venison went to the rich and powerful, the lower orders made do with the ‘nombles’: a Norman French word for deer offal. Anglicisation saw ‘nombles’ pie become ‘humble’ pie. Britain’s most eye-catching pie, this sardine-packed pastry dates back to the 17th Century

Cornwall’s eye-catching Stargazy Pie might be the most distinctive pie of all. Cooked with sardines gazing up from the crust, this distinctive pie has roots in a 17th-Century tale from the fishing village of Mousehole. The story goes that a fisherman named Tom Bawcock braved December storms to land a huge haul of fish that saved the village from starvation. To celebrate, his catch was baked into a giant celebratory pie – with fish heads left poking out as proof that the fish famine was over. Today, Stargazy Pie is traditionally baked with seven kinds of fish, boiled potatoes, boiled eggs and white sauce. The fish serve a practical purpose, not just a symbolic one: oil from the heads enriches the pastry and moistens the pie.

So, now you know!

Daughter Annalise has recently been on holiday in Ireland. Being a true member of the clan EATING was very high on the to-do list. Annalise said in an e-mail that she had had Rolo Pudding whilst there. I have NEVER had a Rolo Pud so ……

First, what are Rolos. Per Wiki,  “Rolo (pronounced “Row-lo”,  is a brand of truncated cone-shaped chocolates with a caramel centre, the shape resembling that of a shallow inverted bucket or tub or a traditional lampshade. They were first manufactured in England by Mackintosh ‘s in 1937″ Rolos out of the packet

I hold the world record for eating a packet of Rolos.

Now for Rolo Pud:You can’t buy it in this country as far as I can tell from the ‘net. This is what it looks like: However there are recipes ……I like the intro to this one:

“Last night I was CRAVING chocolate!  When I say craving, I mean totally hormonal, would probably kill for it, PMSing, give up my left kidney, chocolate craving!
So I made a mad dash for the freezer {where I keep my chocolate stash}
I decided to put a little spin on my “down home, comfort food, chocolate pudding recipe”
How’s a lil Chocolate Rolo Pudding sound folks?
I know…. aren’t you glad I thought of it? 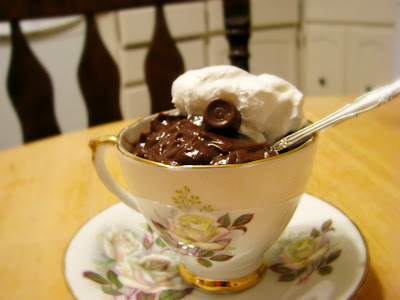 Are you salivating as you wait for the recipe?

Here you are my friends,
Ingredients

I’m off to buy Rolo at dawn tomorrow.