This blog is a story of serendipity. A while back I was talking to a lady visitor. She was admiring the detail on our layout (a common comment I might add). She said, “I love the seagulls on the Virgin Creek Trestle diorama. But, you know, you should have an albatross too – there used to be one in Point Arena.” Now I am an old time auditor trained to nod in a way that people think I believe them so I tucked her comment in the old noggin. This week this photo appeared on the radar: The only info that came with the pic was the caption, “Albatross sign at Point Arena.” Now the words, “Laysan Albatross” are not words that I would normally associate with Point Arena. Could the lady be right? So I started scratching the surface. I quickly got this “hit” in an Audubon website:

“For 19 consecutive winters, a particular Laysan Albatross has hung out in the cove at Point Arena in Mendocino County. Locals have named him Al the Albatross, and occasionally Al B. Tross, and the bird has been known to be pretty social. He’s even been known to get close to the occasional cold water surfer. Anyway, quite a legend has grown around this bird — books have been written, websites dedicated, and all the other things that have ensured the bird’s place in the lore. Word is that Al is likely not a breeding bird, as he’s usually at Point Arena when most of the breeding birds are at Midway Island or one of the islands off Mexico where all the breeding takes place. Laysan Albatrosses usually don’t go anywhere near land unless they are planning to breed, so Al’s annual visits give bird enthusiasts a rare opportunity to view one of these spectacular birds without going to sea. Anyway, posts to the Mendobirds list serve today seem to conclude that Al has ended his Winter 11/12 visit. He was last seen on March 20.”

This was part of an article written by Garrison Foster in 2012.

Next I hit upon a blog about the Point Arena Pier “owned” by Ken Jones. This appeared in the April 2015 blog:

“The “Cove Coffee” shop at the Point Arena pier held a modest crowd, with people sipping hot brew and peering at their newspapers shortly after 7 a.m. Saturday. Then the front door was flung open.

“The albatross is back!” a young, bearded man announced. “Just saw him come in and land.”

The customers all nodded and smiled. They were relieved, because the bird had vanished for almost a week. It was easy to understand why someone might get excited about seeing a bird with a 6- to 7-foot wingspan sail into the home cove. I jumped from my table and went to take a look.

This illustrious visitor is a legendary bird locals had named Mr. Al B. Tross, a wandering Laysan Albatross (Phoebastria immutabilis) who has wintered at this harbor in southern Mendocino County for fourteen consecutive seasons. Though the phenomenon of “”agrants” — individual birds who depart or are blown away from customary migratory routes — is well-known in the birding world, this albatross is something special. He’s not simply dropping by. It seems he has adopted Point Arena as his winter home.”

This was a clip from the San Francisco Chronicle of February 1, 2007 written by Paul McHugh,

In another Audobon site post I picked up a bit more info:

“Al” (or Alice?) is the Laysan Albatross that inhabits Point Arena Cove during the winter months. Typically Al arrives in the area late November or early December, stays for two to three months and then leaves in February or March. Al has done this regularly since the winter of 1994, when first recorded by Todd Easterla & Jim Booker.

Typically albatrosses come to land only to nest, and then in colonies on islands such as the Hawaiian chain for the Laysan Albatross, so Al’s behavior is very unusual. The bird is probably not a breeder because it shows up at Point Arena at the beginning of the Laysan Albatross breeding season and leaves at the season end. As Ron LeValley, biologist and specialist in marine birds says: “Al is somehow mixed up.”

I thought – there must be pics of Al. There are – buckets of them. Here’s a gallery I have put together: Al the Albatross being social at Point-Arena

Now I have also been told there’s a great white that “lives” at Usal ……..

If my faltering memory is correct eagles have been reported along the Navarro River. Whether these three pics are “Mendocino eagles” I am not sure. These pics were found on local Facebook pages. If there is a twitcher out there who can set me to rights I’d appreciate them contacting me.

Until I saw these two photos it had never occurred to me that deer went onto the beach. I have no idea if this is a rare or regular event. I asked wife, Sarah, about it – she goes to the beach very frequently with her hounds – and she said she had never seen a deer anywhere a beach. Deer leaving the water on a Mendocino Coast beach

These pics were in one of Lynn Catlett’s, “You know if you are from Mendocino if……………..” Facebook page.

If anyone can shed any light on the dubject of deer on beaches I’d be happy to hear from them.

A short while ago I was conscripted into taking my wife’s hounds for a walk. My choice of venue for this ghastly job was to walk beside the sea on the Haul Road. The Haul Road is the name of what used to be Union Lumber Company’s railroad tracks from Fort Bragg to Ten Mile River. Whilst recovering from having my arms pulled out of their sockets I looked out over the waves and saw a flight of pelicans skimming along the top of the waves. After the Great Blue heron Pelicans are the birds I enjoy watching the most. Here’s a gallery of pics of pelicans that I have collected. Along with the Great Blue Heron Osprey’s are my favorite bird. If you go along the South side of the Noyo river you’ll come to a public ramp. Look up into the trees and you’ll see Ospreys nesting.  The osprey’s diet consists almost exclusively of fish.

There was a medieval belief that fish were so mesmerised by the osprey that they turned belly-up in surrender, and this is referenced by Shakespeare in Act 4 Scene 5 of Corialanus:

“I think he’ll be to Rome
As is the osprey to the fish, who takes it
By sovereignty of nature.”

Hands up all those who knew that Shakespeare bit? Huh, not even one.

Click on any photo to see the gallery full size. Looking down on an Osprey nest ;Osprey landing on its nest while chicks watch The Great Blue Heron is my favorite bird. I have watched one hunt gophers in a field of a million gopher holes. Now, how did that heron know that there was a gopher down THAT hole. They are tall. They are very graceful. When they land they remind me of a 747 landing. Breathtaking.

In the sixteen years we have lived here I have seen quite a few but, until very recently, have never had a camera to hand when one hove into view. That changed when I was on the beach and I espied one on a rock just beyond the surf: For the technically minded this is what Wiki has to say about the Great Blue Heron: The great blue heron is a large wading bird in the heron family, common near the shores of open water and in wetlands over most of North and Central America . as well as the Caribbean and the Galapogos Islands. These two pics are by pros: Vids are hard come by. This one is the one I like best of the few I have found:

I really like the music that accompanies the vid.

Anyone got better pics?

We have several bears on our layout. They are there, in part, to tell the kids how bears get honey from beehives. The other part is to make visitors aware that bears were very prevalent in the forests along the Mendocino Coast. I have been told that the Pomo Indians  who lived in peace along the Mendocino Coast for 15,000 years before the arrival of the white man feared bears, black and brown. You can read about California bears here. 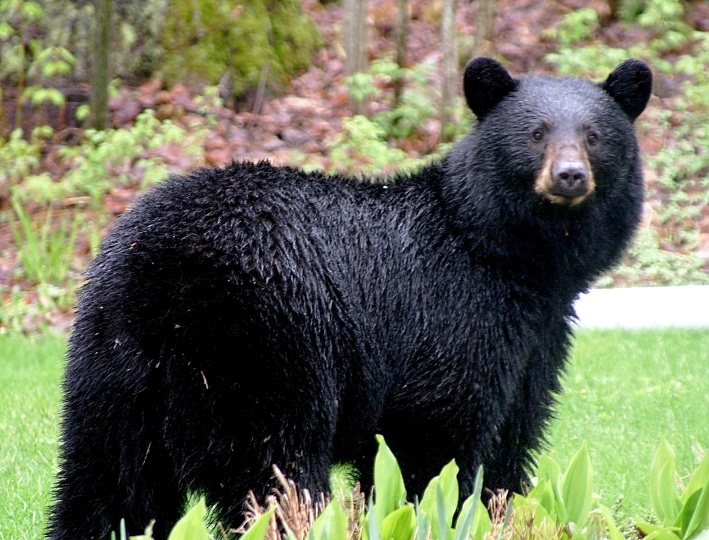 The white man with his rifle eliminated the bears from their surroundings as this piece from the Fort Bragg Advocate of December 27th 1915 attests:

“Fred Roberts and Archie Kempe killed two black bear on South Ridge  on the Ten Mile river.The mother weighed 400 pounds while the cub topped the scales at 75 pounds. Both were fat and the Advocate can vouch for the fact that the steaks were delicious.”

Mike Aplet was coming up the path to the parking lot after visiting the Point Cabrillo lighthouse – he was taking pics of the rock formations there to use on the diorama of Point Cabrillo and the Frolic he is building on our layout – when his wife, Laura, pointed out a coyote to him. The coyote was trying to come down the path as Mike and Laura were walking up. Mike grabbed his camera and got these remarkable shots. Great photography Mike – and thanks.