Talking to visitors to our layout, I have concluded, requires an encyclopedic knowledge of trains and railroads around the world as well as knowing where in town (Fort Bragg, CA.) you can find the best ice-cream (Cowlicks). The questions I can’t answer off the top of my head I jot down on a pad and see if I can find an answer when I get home.

We are building a hill (mountain?) in the northy-west corner of the layout. Give or take its twelve foot high -300 G Scale feet. I had an animated conversation with a young lad and his mother about how we were building the hill and how his grandpa might build one on his N-scale layout. The lad and the mom were clearly impressed with our efforts – its going to be really high. The lad then asked what was the highest train you can ride. I confessed I didn’t know but thought that it might be in Peru. I promised to find out, post a blog and e-mail him with the result of my research.

Well, it took a couple of hours on the ‘net to find out that Peru is NOT the answer. The answer is the The Qinghai–Tibet railway that connects Xining to Lhasa. The length of the railway is 1,215 miles. The line includes the Tanggula Pass which, at 16,640 feet above sea level is the world’s highest point on a railway. Tanngula railway station  at 16,627 feet  is the world’s highest railway station. The 4,390 foot) Fenghuoshan Tunnel is the highest rail tunnel in the world at 16,093 feet above sea level.

Exactly where is it? This map helped me: 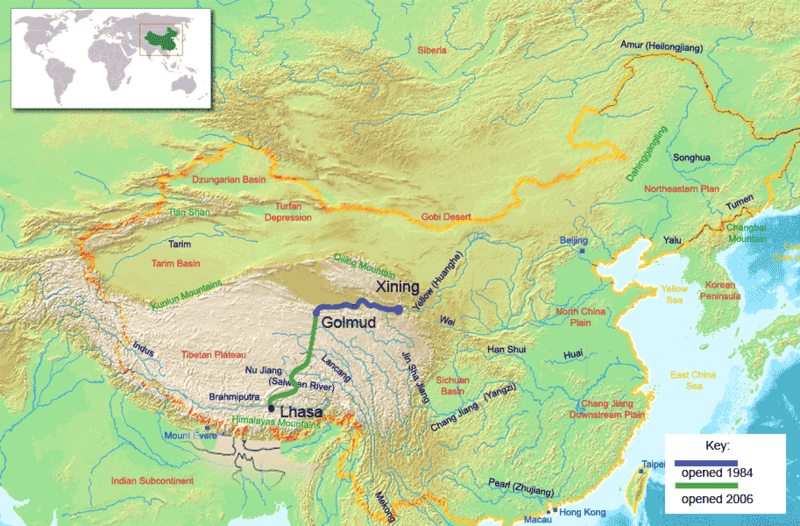 What’s it like to ride on? There aren’t too many vids to enable one to get a taste. This one is the best I can find:

I must confess, world’s highest or not it’s not one for THE LIST.